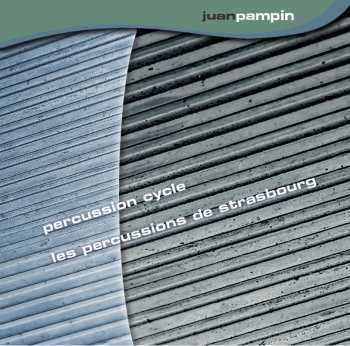 Juan Pampin’s ‘Percussion Cycle’ for percussion instruments and electronic sounds, performed by the renowned Les Percussions de Strasbourg, is comprised of four pieces: ‘Métal Hurlant’, ‘Toco Madera’, ‘Skin Heads’ and ‘On Space’. Each piece relates to the base material of the instruments used and is the result of an exploration of the timbral qualities of the material elements responsible for the production of sound: metals, wood, and skins. The last piece deals with the spatial relationship between all the percussion instruments and their electronic counterparts. Performed live, the pieces are executed by the musicians and speakers for the electronics surrounding the audience.

This recording was produced through the use of the Ambisonic Toolkit (ATK), and represents a first ‘on location’ application of the ATK production system. A Stereo Ambisonic UHJ recording.

This recording was made possible through the support of the Center for Digital Arts and Experimental Media (DXARTS), and has been partially funded by the Royalty Research Fund of the University of Washington.

Special thanks for technical assistance to Fernando Lopez-Lezcano and the Center for Computer Research in Music and Acoustics (CCRMA), Stanford University, Stanford, California, USA.

We would like to dedicate this CD to Jonathan Harvey who departed three years ago leaving us with an immense feeling of emptiness.