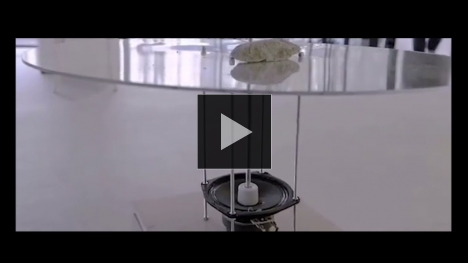 Infrasound can be used to lace audible sound, imply sonic depth or to create controlled vibrations, which can have a range of physical effects on human bodies and objects in general, as well as space. It pertains to vibrations and soundwaves with the frequency being too low to be heard as sound by the human ear, i.e. below about 20 Hz. In order for humans to hear it the sound pressure must be high. Also known as ‘Infrasonics’, the term is also used loosely to describe any low frequency sound.

Unsound both means “unsafe” - and is also a term borrowed from the research unit AUDINT, which they describe as audio-related phenomena in the wider vibrational spectrum, which they argue, are capable of offering insights into the unknown aspects of perception. Their mission is to probe peripheral zones of sound, those frequencies, such as infrasound and ultrasound, existing at the perceptual boundaries. The group even claim there is a phantom sense that once allowed us to communicate with what exists on the edges of perception – what they term the 'third ear' (a term first coined by sound artist Maryanne Amacher) – which can connect to other times and spaces and to other forms of vibratory intelligence - within peripheral sonic perception. The term refers not only to what humans can not hear, but also to non-cognitive, inhuman phenomena connected to the unknown, including the hum, hyperrhythmia, and auditory hallucinations. After reading Steve Goodman’s book; Sonic Warfare: Sound, Affect and the Ecology of Fear - which is an investigation of the sonic realm, questioning the deployments of sound as control, fear, mood, and perceptive manipulators. Steve Goodmans writes; ”vibration plays a key role on this complex and invisible battlefield – a zone in which commercial, military scientific, artistic and popular musical interests are increasingly invested”. I wish to investigate this with a mapping of deployments with vibrational kinetic and sculptural sound.

An in-progress sound installation in which the sound spectrum is of traveling vibrations, created using metal poles in an installation space, loudspeakers, a control system with an algorithmic composition. The intention is participants undergo intrinsic and intense physical experience within the installation space - a vibratory event questioning the perceptive. The aim is to encourage a “deep listening” of sound and to immerse an audience into the sonic field - with sound employing low frequencies which should be felt, a psychosomatic experience that invites a viewer to become aware of the space surrounding it.