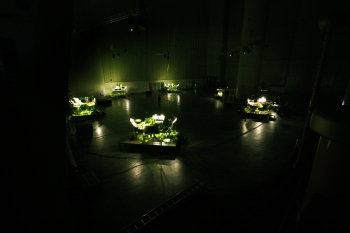 The pleasure of space: This cannot be put into words, it is unspoken. Approximately: it is a form of experience --the "presence of absence"; exhilarating differences between the plane and the cavern, between the street and your living-room; the symmetries and dissymmetries emphasizing the spatial properties of my body: right and left, up and down. Taken to its extreme, the pleasure of space leans toward the poetics of the unconscious, to the edge of madness.

On Space is a composition for six percussionists and 3D electronic sound commissioned by French percussion ensemble Les Percussions de Strasbourg. The first version of the piece was premiered in March 2000 as part of the opening concert of the Musiques en Scène Festival in Lyon, France. The final version of the piece was completed in 2005 and recorded in January 2006 by Les Percussions de Strasbourg. On Space closes a cycle of pieces that explore the materiality of percussion sound: "Métal Hurlant" (1996, metal), "Toco Madera" (1997, wood), and "Skin Heads" (1998, skins). On Space uses the sound materials created in these previous works to shape space as a continuous matter, capable of inflections and changes.

On Space uses a particular performance layout where the audience is surrounded by the six percussion players and immersed in a 3D sound system. The four sections of the work are named after the four cardinal points (North, West, East, South) and losely follow the narrative of J. L. Borges' short story Death and the Compass.

The electronic part of On Space was composed using three main technology components: a complex granular processing system (written in CLM), the ATS spectral modeling system, and ambisonics. All three components were combined to create a meta-system (written in Lisp) in which any of the components could be combined with any other. For instance, the granulation process could be controlled using spectral data coming from ATS, and grains distributed spatially according to stochastic rules using ambisonics. One of the main ideas behind the spatialization of the piece was to go beyond point source dynamic location (panning) and to create dynamic volumes of sound; for this purpose several ambisonic imaging processing techniques were applied to the granular streams to change their location and spread. A good example of this volumetric approach occurs during the first section of the piece (North), where some sound layers are treated using omnidirectional spreading patterns while others have cardioid or figure-of-eight distributions changing their pattern and focal location over time. The use of decorrelated signals shaped by changing polar patterns, create the illusion of a metallic "sound fog" that blends with the percussion sounds.

The electronic part of the piece was encoded in ambisonic b-format. This three-dimensional format can be decoded to any number of channels but usually six or twelve (if in 3D) are used. For the premiere of the piece the six percussion players were set in a circle (or oval) around the audience and six speakers interleaved with them (see the Diagrams section below). Beside the six decoded channels, two additional audio channels were used for a click track, required to synchronize the performance in such a large large space without the need of a conductor (the site of the performance was 42m long). Using this click track, it was also possible to write multi-tempi sections of the piece where players are split in two groups of three receiving each of them a different tempo (see South section). A radio frequency in-ear wireless monitoring system was used to distribute the click track for the performance and recording.

On Space was recorded by Les Percussions de Strasbourg from January 11 to 13, 2006, at Palais des Fêtes, Strasbourg, France. Performers were Bernard Lesage, Claude Ferrier, Olaf Tzschoppe, Jean-Paul Bernard, Keiko Nakamura, François Papirer (in score order from percussion I to VI). The recording was done using a ST250 soundfield microphone, and an array of eight Schoeps MK5 omnidirectional microphones. A special software system was developed to combine all microphones into a higher order ambisonics array allowing to capture directional and diffused sound fields in three dimensions. Joseph L. Anderson was the audio consultant and engineer for the recording, and I was the artistic producer and supervisor. This project was made possible by a Royalty Research Fund grant from University of Washington.