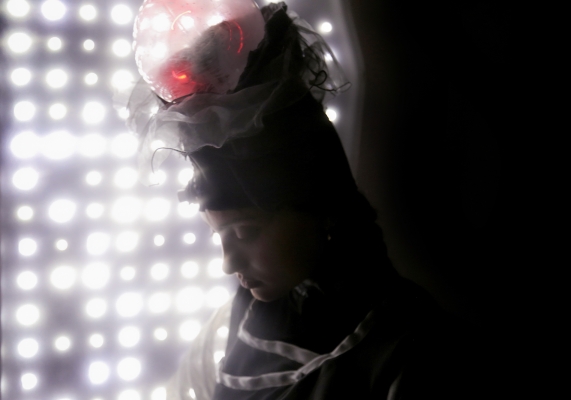 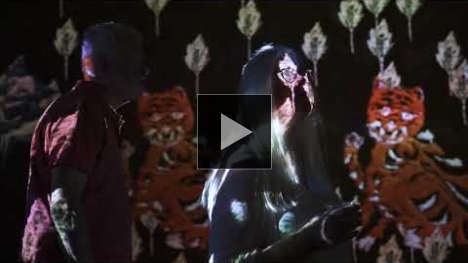 Polaris solo exhibition at Oxbow, Seattle
Polaris is inspired by starlight and our existence in the universe. Seattle WA, 2018-19

Polaris, named for the north star, is an operatic sci-fi interactive installation inspired by William Morris’s story of a romantic utopian socialist society of the future.

Polaris tells the story of the Imjin War, the 16th-century Japanese invasion of Korea, through the perspective of a woman from the year 2500AD using dance, video game-play, dance, and sculpture. The story of the Imjin War is not commonly known outside of Asia, but it played an important role in shaping modern Korean culture, so a little history is necessary: 500 years ago, the Choson dynasty of Korea had a strong bond with the Ming dynasty in China. The Ming was very dominant economically and culturally so it seemed natural to obey them and maintain close ties. Japan, in contrast, was relatively poor, often seeking aid from the Choson, so it was never imagined that they would have the audacity to invade.

Due to their bureaucratic mindset and neo-Confucian hierarchy, the Choson felt safe from the Japanese, who they considered less civilized, and were taken off guard by their aggression. When the Japanese landed on the coast, the Choson believed that their king would protect them, as he should have done according to Confucian principles, but he fled, along with the upper classes, allowing the Japanese soldiers to kill many vulnerable women and children. Eventually, with the help of the Chinese, the Choson succeeded in expelling the Japanese military, but the actions of the Choson leadership exposed the neo-Confucian class system for its hypocrisy and the lower classes began to see the upper classes as irresponsible, greedy and sneaky. It is a contradiction that persists into the present day, as Korea has never succeeded in shaking off the pernicious elements of its neo-Confucist hierarchy, and continues to be plagued with misogyny, ageism, and classism.

How will our culture have developed 500 years from now? In Polaris, Chanee Choi playfully explores the potential of cultural evolution in collaboration with choreographers Sarah Lisette Chiesa, and Katrina Wolfe, who mixed elements of Japanese Butoh with the Korean Seung-mu, a dance created by female Choson monks after the Imjin war to heal and console. In the mingling of the two forms, we continue this healing and gesture toward an inclusive future utopia.

Polaris is a space to discover the signal within that connects all of us through immersive light and interactive video installation. Polaris is inspired by starlight and our existence in the universe. We have a signal within us that we can use to communicate with other worlds. The Introspective signal that connects all of us might be in a dead zone temporarily, but we should believe that it is within us. Our signal connects us to the universe, and could be something we can see, feel, or touch. Like footsteps echoing in a cave, your movements through Polaris will be echoed in the light it shines as it reacts to your presence. People are invited into The Polaris Experience by an 8’ x 4’ sculpture which contains motion-activated LEDs with IR receivers. The sculpture is shaped like using four profiles of my face.

Visitors are encouraged to participate by playing a game on a large screen projected on a wall. The video game is motivated by “Samsara”, which is from Buddhist theory: The beginningless cycle of repeated birth, mundane existence and dying again. It’s a motion game played by shaking by a wearable controller with your hand. It has 5 different levels created with embroidered elements. It is projected onto two rounded screens that are facing each other in the middle of the gallery.

At the opening reception, Korean Seung mu(승무(僧舞)) and Japanese Butoh(舞踏, Butō) dancers performed around and within the installation wearing LEDs dresses that respond to the choreography.

The first Polaris show, located in the Georgetown Oxbow gallery, was scheduled for April 2019.

Special thanks to Oxbow Gallery Seattle, City of Bellevue, Bellevue Art Museum, Janet Galore, and the people at DXARTS.