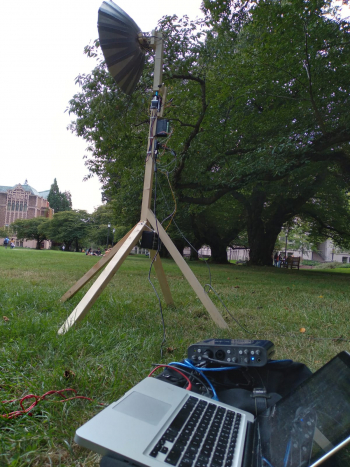 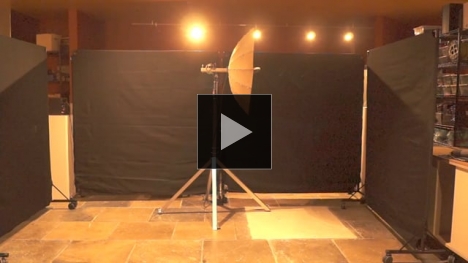 This project is about the creation of a listening surveillance device, an ear prosthesis that can collect voices, transcribe them to text, and then return it to sound.
The piece is based on a parabolic dish, that has the quality of detecting sound on a long distance. This shape has its references in the Acoustic Mirrors, created and used by the British Army after the First World War to detect airplanes, and also in a long list of listening devices projects, both artistic and scientific created with the purpose to extend the biology capacities of the human body.
This device of this project is always rotating searching for sounds, looking for sound events or natural/mechanical, human or animal, and when the system detects some sound (in this proposal, specifically the human voice) the parabolic stops and starts to collect the sound. Then, the system transcribes to text the human voice collected and stores it on a database, generating in many cases strange and incoherent text. After that, the system returns the information to sound through text to speech.
In this sense the piece could be an ironic idea of the surveillance system, in some points it is not perfect, and those mistakes create probably wrong information, therefore a lot of electronic trash, and a process degradation of the information. The object tries to show how the human voice could be transformed into a digital object and could be analyzed, recorded, transformed, and stored. The object tries to interpellate the privacy and the freedom concept, the relevance of the information collected in surveillance systems, and the ethical and political limits in this kind of device.

Searching: The parabolic is rotating in 180º, in this stage the microphone is closed, just it is analyzing the environment. That is mean, the software filtering the background environment.
The filter is optimized to get the human voice using the Google API TEXT TO SPEECH.
Collecting: When the program detects any human voice, the motor stops in the position that the parabolic detected the sound and during the system starts to record, store and transcribe to text the voice collected.Text to speech: In real time, the system transform the text generated on speech

Conceptual ideas
In the 1970s, Michel Foucault expressed the concept of biopolitics, as a form of power and social control through rules and policies that states exercise to discipline the social body, establishing a relationship between biology, life and politics. In this way, Foucault (1978) in the book "The history of sexuality" argues that this society is built with different and complex humans, who must be controlled and regulated to improve the efficiency of life, "This power over life it is the axis of biopolitics, on the other hand, the control of the body of the population as a species through regulatory mechanisms.” Therefore, according to Foucault, this concept of biopolitics has contributed to the development of capillary society and its control institutions in the search to improve the effectiveness and benefits of countries.
Different events throughout history have created the perfect context to change the meaning of control systems. It seems that while society is in a potentially dangerous situation, states create strong political policies on control and surveillance systems. this has been the case from the world wars to our times - Btihaj Ajana (2005), professor at King's College London, UK, analyzes how some historical events provide a new perspective on the function of control systems, “With the increasing Post-September uncertainties Globally, the issue of surveillance receives renewed importance through speeches surrounding the proliferation of "control" technologies and the rhetoric of (in) security that permeates contemporary politics. Electronic technologies are seen as intensifying the "capacity" and ubiquity of surveillance by creating "new" forms of social control”. Ajana, therefore also establishes a relationship between the new contexts and the technologies that provide technical advances in accordance with biopolitical objectives. For example, after the first World War, between 1915 and 1935, Great Britain created a military architectural structure, based on a concave parabolic design, that detects a possible aeronautical threat at long distance. In addition to these "acoustic mirrors," English designer Tucker developed several listening systems that aimed to track, control, and protect the sovereignty of the nation.

Technology has emerged as a major factor in the way surveillance systems enter life. Concept as a privacy, private property are resignified with the new uses of technological devices. In this sense, in the current management of the COVID-19 pandemic it seems that a new paradigm shift is coming. South Korean philosopher Byung-Chul Han, poses that due how the Asian countries are controlling the pandemic, apparently successfully, the control and surveillance technology system used by those countries could be importing to the western countries, putting in conflict two extreme vision of the world. This is because Asian countries have a different concept of public space and private property. In this sense, the surveillance system used by Asian governments provides the necessary data to control the population, and does not constitute a violation of their rights. The interesting issue is this new order is about thee manage of the information, the data of the population, and the technologies could provide this power:
“However, due to data protection, a digital virus combat comparable to Asia is not possible in Europe. Chinese mobile and internet providers share sensitive customer data with security services and with ministries of health. The State therefore knows where I am, who I am with, what I do, what I look for, what I think about, what I eat, what I buy, where I go. It is possible that in the future the State will also control body temperature, weight, blood sugar level, etc. A digital biopolitics that accompanies the digital psychopolitics that actively controls people” (Byung-Chul Han, 2020).

Understanding biopolitics as a way to establish control over the power of bodies and life, and finally technological advances as biopolitical purposes: How the human-biological limits allow creating new devices to reach the impossible? How the digital-electronic bodies-devices be transformed, analyzed, and used to face us to the concepts of surveillance, privacy, freedom, and voyeurism?
In 2007, the post-humanist artist Stelarc said "The body is obsolete". Since 1970, Stelarc has been using his body to do experiments asking what the body's capabilities are at this time and whether it is possible to survive only on human features.
The condition of human machines, cyborgs and new possible humanoids, propose us to reflect on how to understand the body in technological times, how to face life with human limitations and capabilities. Beyond reflecting on whether technologies provide new perspectives and expand our biological abilities to reach complex objects, resistance is also an attitude of how we are managing our lives in relation to the technologies that are fostering us in our daily lives. In Byung-Chul Han words, who has the data is who controls sovereignty. In this sense, the new devices based on human capacities-limitations provide a new order in our life, allowing us to reflect on the individual, the collective, privacy and freedom, changing the perspective of our behavior and, therefore, about our culture and human relations.

Kunzru, H. (1997), You are a cyborg. Wired. https://www.wired.com/1997/02/ffharaway/
Lawler-Dormer, S (2018), Redefining The Human Body As “Meat, Metal and Code”: An Interview with Stelarc. Sleek. https://www.sleek-mag.com/article/stelarc-interview-posthumanism/