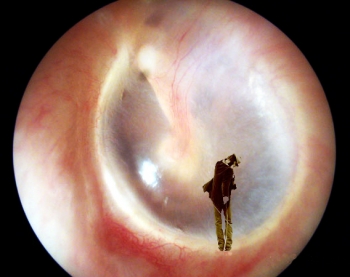 Nanovibrancy (2011) was undertaken at SymbioticA, the Centre of Excellence in Biological Arts at the University of Western Australia.  It was held at the John Curtin Gallery at Curtin University, Perth, Western Australia in July 2011.  In it, a silk eardrum is probed in real time with an atomic force microscope – its surface vibrations are recorded and amplified as a multi-channel sound installation.  In so doing, the project decentralises the scientific gaze from occularcentric to somatic and multimodal; and reduces the act of listening from human-scale to the conductive resonance of atomic vibrations.  Nanovibrancy features a mix of wet biological science, empirical physical data processing and the aesthetics of a site-specific sound installation.

Nanovibrancy utlizes silk fibroin membrane currently used in tympanoplasty.  In the experimental setup, HaCat (skin) cells are seeded on the membrane and cultured to achieve confluence.  They are then probed under the atomic force microscope, where atomic vibrations are recorded.  The microscope is left in the open laboratory environment in a gesture of expanded listening.

The atomic vibrations in amplitudes of nanometers are recorded and amplified to hearing range.  The sampling rate is also corrected for compatibility with modern sound devices.

The AFM is placed in the gallery space, and controlled live by the artist who takes on the role of engineer.  He controls the X,Y and Z axes of the cantilever via Nanoscope software and a haptic interface (PICO Angler).

Nanovibrancy is concerned with the experience of listening as conductive resonance through the continuum of atomic vibrations through techno-scientific assemblages.  It extends the physiology of the human ear into mechanical, computational and architectural bodies.  As a sound piece, it also discusses space and the overlap of an imaginative ‘miniature’ on the perception of human-scale phenomenon.

Nanovibrancy was presented with the support of SymbioticA, the Centre of Excellence in Biological Arts, the Curtin Nanochemistry Institute at Curtin University, the Ear Sciences Insitute of Australia and is held in partnership with the John Curtin Gallery.