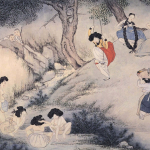 Mi-In-Do is about the hidden culture of the lives of women and other non-normative groups as depicted in Asian Folk Arts during the Joseon dynasty. This piece is critical of the restrictive hierarchical culture of Confucianism which continues to fuel social pressures in Asia today. I use the motifs of Yin-Yang and the five elements, exaggerated by metaphor, to highlight the trauma caused by this system.

Within the animation, the viewer will play the role of a peeping tom, a voyeurist who must hide behind stones in order to watch the puppet-like 2d animations of women extracted from the Orientalist paintings. By the end, the performer will have actually eaten these women in a fantastic cannibalistic ritual.

The consumption of these two-dimensional women will evolve so naturally out of the action, and be so aesthetically enjoyable for the player that they will find themselves tricked into taking pleasure in the overt disposability and powerlessness of these creatures, who, uncanny though they may be, are depictions of the way real women were perceived under Confucianism.

Mi-In-Do is an immersive video experience that uses absurdity and aesthetics to lure the viewer into a confrontation with the contradictions of Confucian values. By being made to feel uncomfortable, uneasy, and overwhelmed they are given the opportunity to question the assumptions underlying dominant societal structures.