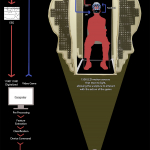 In order to blend the conceptual methodologies of my fine arts practice with the innate grammatical syntax of technologies such as virtual reality, electroencephalographic monitoring, and e-textiles I will need to study the theory and application of each of these technologies while simultaneously researching the topics necessitating their implementation. My project currently in development which combines Electroencephalography (EEG) sensors and Virtual Reality(VR) goggles to create a game-play experience that colorfully explores the physical dynamics of a brain with Alzheimer's as well as the poetic and political implications of this much-feared state of being.

Electroencephalography (EEG) is the measurement of the electrical activity of the brain by electrodes placed on the scalp. Artists have worked with EEG in past. Alvin Lucier performed Music for Solo Performer in 1965, which is generally considered to be the first musical work to use brain waves to generate sound directly. Richard Karpen and Juan Pampin collaborated with the JACK Quartet in 2019 for the piece, Human Subjects, in which they generated and controlled sounds from brain waves using EEG. This DXARTS concert was what triggered my desire to explore the use of EEG headsets in my own work.

Alzheimer’s disease is an irreversible, progressive brain disorder that slowly destroys memory and thinking skills, and eventually, the ability to carry out even simple tasks. More than 5.5 million Americans, most of them age 65 or older, have dementia caused by Alzheimer’s. While Alzheimer’s is by far the most well known cause of dementia, the causes of dementia can vary. Other dementias include Lewy body dementia, frontotemporal disorders, and vascular dementia. It is also common for people to develop a combination of two or more types of dementia, called mixed dementia. Dementia deaths have more than doubled in the past twenty years in the United States. Once you are diagnosed with dementia, there is no cure, only therapies to slow its progression.

What would it be like to die softly & slowly without hope? Your appearance will be the same as others who do not have dementia, but your insides will be lost--- it starts from your eyes- your eyes will become dull first, so that people notice something is changing. Everyone who loves you will be in pain as you lose your memory, watching you recede like a flower wilting slowly. In the game narrative of this project, you will be an Alzheimer patient so you only be present for the same short moment, but you can experience your family surrounding you-- agonizing as they watch you. While the storyline may be dark, the player of my game will be challenged with a new kind of problem-solving and see what life is like for millions.

The VR game is a 1st person 3D simulation video game where players are asked to make choices that affect their storyline. The player’s character, my mother, is a 3D 60-year-old Korean woman who is beginning to experience the symptoms of Alzheimer's. I use my own mother as the main character in order to stress the tenderness and curiosity of this game, the deep desire to understand the experience of your most beloved family members as they fade away. Without this care and specificity, the game could easily become macabre. The personal is political and I use the story of my mother because although specific, it is relevant to any aging population.

I will use the feed from the player’s EEG sensors to shape the physical space that the player navigates. There is no controller in this game, but the player’s eyes will select the choices displayed. After 5 seconds of eyes focusing on a button, it will be selected. Depending on the state development of dementia, the length of time the player must look at the buttons to achieve a result will vary. As the game progresses, the player will also find it more difficult to control the character’s body as she loses spatial understanding. They will have a hard time putting a key in a lock, grabbing an apple, and petting their dog. The video feed will be projected for the audience onto the same 8’ tall face sculptures from my game, Polaris, which has 1500 LED motion sensors that react to light, allowing the sculpture to interact with the action of the game.

I plan on visiting Korea to meet with my mother for the research on this project. She and my grandmother have both been diagnosed with Alzheimer’s (I have two genes that heavily increase my risk of Alzheimer's disease as well). I will visit the brain and memory wellness center run by the Korean government that she has been attending. Next, I’d like to visit similar community care institutions in Japan, where the aging population has resulted in the disease reaching epidemic proportions but is said to be handled with pragmatism, respect, and empathy. Finally, I would like to meet with the Alzheimer’s community in the Seattle area to see how the disease is handled in the United States.

This project is in an early stage but will be an evolution of my previous works, such as the video games with integrated live-action performance and sculpture, LOOP PA POW(2016), Fly High(2018), and Polaris(2019), as well as my series of e-textile garments, Atayal Modern Times(2019). Please refer to my portfolio for documentation of these works.