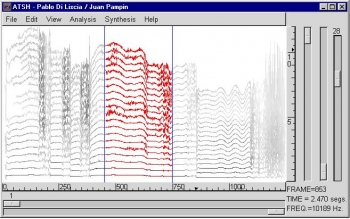 ATS is a spectral modeling system based on a sinusoidal plus critical-band noise decomposition. The system can be used to analyze recorded sounds, transform their spectrum using a wide variety of algorithms and resynthesize them both out of time and in real time.

Psychoacoustic processing informs the system's sinusoidal tracking and noise modeling algorithms. Perceptual Audio Coding (PAC) techniques such as Signal-to-Mask Ratio (SMR) evaluation are used to achieve perceptually accurate sinusoidal tracking. SMR values are also used as a psychoacoustic metric to determine the perceptual relevance of partials during analysis data postprocessing. The system's noise component is modeled using Bark-scale frequency warping and sub-band noise energy evaluation. Noise energy at the sub-bands is then distributed on a frame-by-frame basis among the partials resulting in a compact hybrid representation based on noise modulated sinusoidal trajectories.

Originally implemented in LISP, using the CLM sound synthesis and processing language, ATS has been ported to C in the form of a spectral modeling library. This library, called ATSA, implements the ATS system API which has served as foundation for the development of the ATSH graphic user interface. Written in GTK+, ATSH not only provides user-friendly access to the ATS analysis/synthesis core but also graphic data editing and transformation tools. ATS interfaces for SuperCollider, Csound and PD have also been developed.

More detailed information can be found on the ATS wiki page.