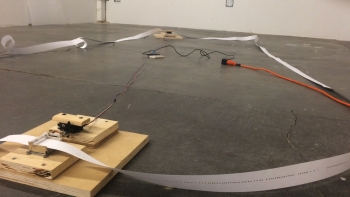 While on a long distance round-trip by plane, you might experience a time lag which gets you to re-encounter the time that you went through previously or even losing what is considered a “present time” as you travel through the air. The idea of The Two Passing Times originated from the question--What if there are different “timezone” in the plane while it flies in the air as there are different timezones on the lands? In particular, I considered the flight as a temporary portable world between two different places and tried to create a new subjective time system.

The Two Passing Times shows a redefined virtual time system during flight, based on a real-time flight status data from the internet. While the information of flight status provide consistent changes in the flight speed, latitude, and longitude based on the time in final destination, I re-parse the data and obtain a new time system for a flying plane in the air. Moreover, with the re-calculated time lag and changes in longitude, which connects the distant times between arrival and departure locations. Ironically, this subjective time seems to be an organic data which is compressed or even delayed just as the relative time theory shows.

The installation of The Two Passing Times consists of two faced screens and music boxes that are displayed symmetrically with a music note strip connected to them. For instance, these are for showing the differences between shared and individual times through visualization and auditory at the same time. While the times on each screen slightly become synchronized and desynchronized, the pitch on two music boxes change along with the time.

My intention for this project is to represent a difference between the common time system that we are acclimated to and the physical experience in time for an individual during a flight.