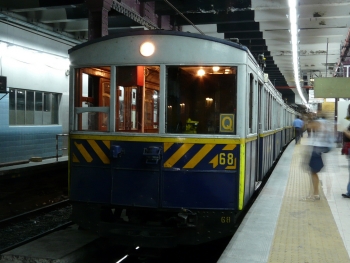 "And then it has happened again, and now it starts to happen everywhere. But -he astutely adds- only in the metro I can realize it because to travel in metro is like being inside a clock. The stations are the minutes, you know, it is that time of yours, of now; but I know that there is a different time, and I've been thinking, thinking…"

A Line was composed using field recordings from the city of Buenos Aires captured over the southern springs of 2009, 2010 and 2011. The title of the piece refers to subway line "A", the first subway line of Buenos Aires which was opened to the public in 1913 and operated with its original wooden cars until 2013. It also refers to the line dividing the South and North of the city along which line "A" runs.

The "A" line was the place of my early urban explorations. I spent hours riding in the front car with my grandfather, next to the motorman, from where we could see the signals and track changes, going from the beginning to the end of the line in a loop. Only getting off at one of the stations to go play at one of the many parks along the line would distract me from that hypnotic underground journey. Plaza de Mayo, Congreso, Once, Parque Rivadavia, where places of joy, where I swung, fed pigeons, played soccer and climbed trees, but nothing compared with the rides, which sometimes continued on the electric train that extends line "A" to the West into the suburbs.

Almost forty years from those early journeys, it has been fascinating to transfer this experience to my son Eloy, who quickly became a fan of line "A" (refusing to ride other than the front car!) and shared many rides with me while I was making field recordings for the piece. The form of the piece represents an imaginary journey through the city him: he is five years old at the beginning of the trip and almost seven at our arrival to the end of the line. Recordings from places and events happening on the line (under and above the ground) were algorithmically edited and transformed to create a soundscape that attempts to capture the chaotic energy of this lively part of the city of Buenos Aires.

Many thank to Joseph Anderson for his assistance during the mixing and mastering of the piece and to my son Eloy for those wonderful subway trips!.