… that language is shaped air … 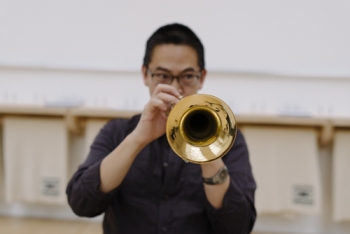 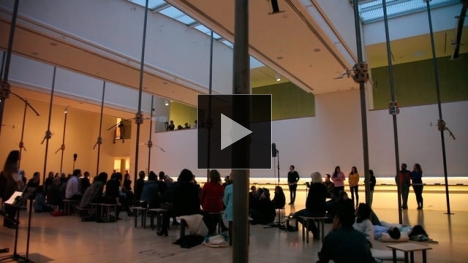 … that language is shaped air … borrows its title from a quote found in one of the newsprint pages I picked in my first visit to Ann Hamilton’s the common SENSE. The piece of paper –part of the exhibitions’s commonplace book– presented a magnified scan from a book with this short phrase and a bibliographical reference leading to the full quotation where it belongs:

"I take it to be obvious to anyone who raises nose from book: language is completely inadequate to the real. . . . Poetry is language used with an awareness of the poverty of language. . . . Poetry remembers that language is shaped air; it remembers ashes to ashes, dust to dust, wind to wind; it knows we don't own what we know. It knows the world is, after all, unnameable, so it listens hard before it speaks, and wraps that listening into the linguistic act.”

In the same spirit of common placing, ...that language is shaped air… presents multiple materials coming from pieces I’ve set aside in my own commonplace music book. These quotes take the shape of distant echoes and resonances, only appearing transparently in a few passages of the piece. As the scanned phrase from Bringhurst’s text, these materials are brought into a new context, distorted through writing and improvisation; some of them come from my own works or from sketches for works I’ve never finished, others were found in recordings of improvisations and transcribed for this performance. They were chosen for their particular tactile qualities, somehow exceeding the sense of hearing, emphasizing hearing "as touching at a distance" in a similar way the bullroarers in Hamilton's piece do. The score for these mechatronic devices –especially written for this performance– was constructed based on their specific temporal and physical dynamics, exploring the tensions between human and machine performance, complementing the instruments in indexing the space of the South Gallery through sound.

Many thanks to the Henry Art Gallery staff for their help throughout the production of this project.

This project was realized with the support of the Center for Digital Arts and Experimental Media (DXARTS), University of Washington

The Seattle Chamber Players would like to thank the National Endowment for the Arts and Seattle’s Office of Arts and Culture for funding this project.