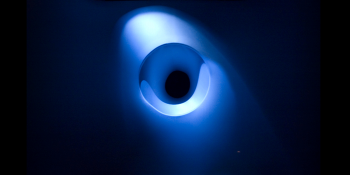 Entanglement draws a symbolic acoustic line between two distant locations, SOIL Gallery and 911 Media Arts Center in Seattle. A hyper-directional sound beam linearizes the acoustics of the two galleries creating the illusion of a single, infinite line of sound into which both sites get trapped. This fragile acoustic construction can be physically disturbed by the participants at each location. Using their body, participants can interfere with the acoustic waveguide, spilling over particles of the linear sound field into the room as they block their transit to the other site. The piece not only provokes the "entanglement" of the participants with their own sonic perception locally but also remotely, as the acoustic shadow of their bodies gets cast onto the other space. In this way, Entanglement explores the concept of "tele-absense" (rather than tele-presence), using a virtual acoustic channel to telematically project the disembodied presence of participants interacting with the acoustic waveguide.

One of the main goals of Entanglement was to create the illusion of a continuous space: a “place” elongated across the city. It was with this objective in mind that instead of stressing the differences between the remote gallery spaces the choice was to unify them visually and sonically, turning them complementary and presenting participants with a space-sound ambiguity. This conceptual strategy was based on the homogeneous architectural design of both sites, avoiding a binary or didactic distinction between them. The visual design of the spaces consisted of two mirrored structures located at the extremes of each space (see the picture gallery for a panoramic photo of one of the sites). Both structures were built using a flexible material that allowed giving them organic shapes, braking the cubic floorpan of the gallery spaces. One of the structures contained a circular channel of about 50cm in diameter and 1m of depth hosting an ultrasonic transducer. The opposite structure–of a more irregular topology–contained a hidden microphone that captured the sounds emitted from the transducer on other side of the room. The installation site was completed with a 6-chanel speaker rig set around the room (these speakers were hidden to the participants).

After entering one of the sites, immersed in almost complete darkness, participants could barely see the two tenuously illuminated structures which presented indiscernible organic forms. The complete shape of the structures reveled themselves gradually as the eyes of the participants adapted to the dark space. During this lapse of time of visual adaptation–which duration varies for each person–the experience of the installation was almost completely aural and physical, as participants had to use their ears and their body to explore the space.  As the visual environment revealed itself dynamically, several aspects of the sound environment were also discovered, depending on the movements of the participants and their interaction with the sound beam transversing the room.

The sounds emanated from the ultrasonic transducer produced a beam of high-density granular sounds only perceived when participants were in axis with the it. Once in the beam area, the body of the participant acted as a blocking object, diffracting part of the granular particles and hampering their projection to the other site in a partial or complete way. This local perturbation of the sound beam produced a remote one, changing the acoustic conditions of the other site from where it was perceived as an acoustic shadow, a sort of ghostly acousmatic presence.

From a technical perspective, this illusory perturbation was created by the interaction between the ultrasonic sound beam and an ambisonic sound system. The ultrasonic sound beam emitted from one side of the room was captured by the microphone on the opposite side and its amplitude was tracked by an algorithm, producing a continuous control signal which was used to measure the level of interruption of the beam. This metric was in turn applied to multiple parameters of the system, producing a sonic exchange between the beam and the ambisonic system. Going through the beam area, participants produced discontinuities in the control signal. The level of these discontinuities controls the number of granular particles which were diverted to the surrounding ambisonics array, creating the illusion of diffraction and immersion. The granular dispersion pattern and density of the particles was also controlled by this parameter.

When the interruption level went beyond a certain threshold the system sent a message to the other site over the Internet. This message triggered a sound transformation process enhancing the acoustic shadow illusion. A new message was sent when the control signal got back to an operational level, indicating that the sound beam has been reestablished and terminating the remote process. In this way, the presence of active participants in both sites could produce great sonic complexity. Local and global perturbation levels changed the way the system reacted, depending on the level of activity and the duration of the interactions. The system encouraged longer interactions, inviting bodily and aural exploration.

This collaborative installation was part of the Ultrasonic Beam Forming research project.