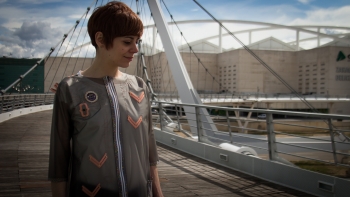 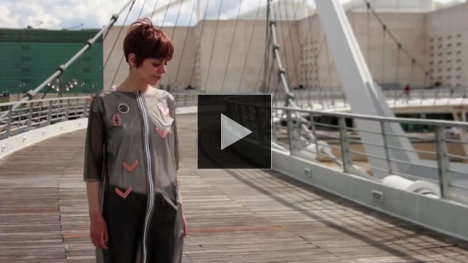 Cosmic Bitcasting is a collaboration between media artist Afroditi Psarra and experimental physicist Cécile Lapoire on creating a wearable cosmic ray detector. The first prototype was developed during a one-month residency at ETOPIA in Zaragoza, in the context of the exhibition Reverberadas. The work is currently presented at the Alchemists of Art and Science exhibition at the Ars Electronica Center in Linz, Austria.

According to Nicholas Negroponte in his 1995 book “Being Digital”, the fundamental difference between the digital and the physical realm is that the former is composed of bits and the latter of atoms. In the information highway, the data we collect from the world of atoms takes the form of bits, and the fundamental characteristic of these bits is that they can be manipulated and expressed in a multitude of forms.

In our era of continuous technologic and scientific discoveries, where space probes are scouting the galaxy for earth-like planets and huge particle accelerators are simulating the birth of our universe, these bits of “cosmic” data are extremely important in order for humankind to grasp the invisible world that surrounds us in its everyday existence.

Cosmic Bitcasting emerges from the idea of connecting the human body with the cosmos by creating a wearable with embedded actuators (light, sound and vibration) that will provide sensory information on the invisible cosmic radiation that surrounds us. The project proposes the creation of an open-source, wearable detector, that will detect secondary muons generated by cosmic rays hitting the Earth’s atmosphere that pass through the human body.

The aim of this project is to create a hand-crafted technological artifact intersecting science and art, that could potentially create future mythologies/methodologies and will provide a fertile field of experimentation with DIY (Do It Yourself) and DIWO (Do It With Others) practices of particle physics. Furthermore, the idea of this project is to create an open source garment, that can be fabricated by anyone and thus contribute in the creation of an array of wearable detectors that will generate useful cosmic radiation data.

The project is open to many types of outcomes, since depending on the volume and safety measures of the actual detector it could translate in an audiovisual performance piece, in an hybrid object that combines the physical and digital realm, and in an artistic manual for DIY scientific research. The intention of the piece is to engage the public to experience the invisible cosmic radiation landscape and to create an archive of cosmic data that could contribute to the further research of the phenomenon of cosmic rays.