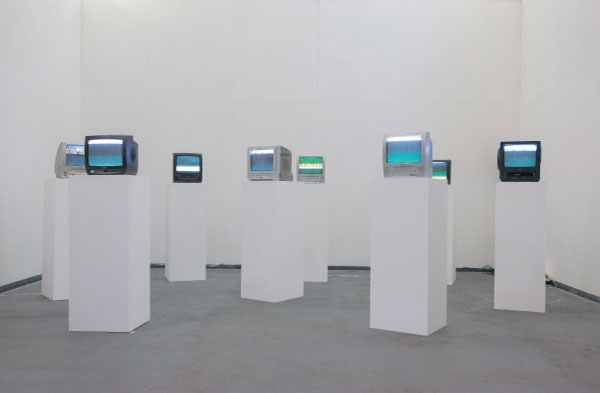 Border Airport by Eleanor Jones, shown at SuperLux in Glasgow (UK), recorded in Nida (Lithuania), May 2018.

This work was realized at time spent at the Art Colony in Nida, Lithuania, and was finalized and shown in Glasgow, Scotland, in 2018.

Border Airport is a 8-channel audiovisual installation that aims to connect the experienced installation space and an airfield located in Nida, Lithuania. Nida airport was built by the soviets during the USSR occupation. It was abandoned during the dissolution of the Soviet Union in 1991. Since then, the human-built construction has been resting quietly like a coffin monument waiting to be unearthed. The small aerodrome has transformed itself into a post-soviet cement sculpture, hidden behind the wilderness of the surrounding natural habitat: the forest, the lagoon, the dunes and the Baltic sea. Whilst not immediately visible or detectible, the airport continues to linger and converse.

The intention was to play with the idea of connecting space and time. It transports the disused airfield site, located thousands of kilometers away, into the space of a gallery/studio. Using a row of 8 video monitors and a 4-channel sound setup, the artwork presents the audiovisual landscape of the site with intermittent auditory extracts of found audio of a women singing old Lithuanian folk songs, which periodically emit from television monitors.

The aim of the artwork is to transport the auditory and the visual ambience of the physically distant landscape surrounding the airstrip into an enclosed space.