ALL OF THESE THINGS ARE MEANT TO BE BROKEN 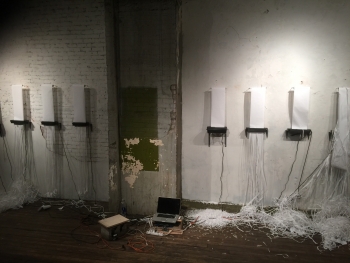 Thursday, November 17 at 8pm will feature Tyshawn Sorey and Mari Ohno in the event All of these are made to be broken. A closing reception and concert will take place on Sunday, November 20 at 8pm, with performances by Miya Masaoka, Asha Tamirisa and Caroline Park. Viewing hours for installations are

Ranjit Bhatnagar's Fidget (2016) is similarly tactile, as a wooden sculpture is activated by dozens of transducers in patterns inspired by wave motion and restless fingers and legs.

Bryan Jacobs continues his playful experimentations with robotic instrumentalists in Subwhistle (2015), in which four slidewhistles are individually connected to a subwoofer, channeling the displaced air from the rumbling bass of the speaker into the flutes, metamorphosing one form of sound production into another.

Alec Hall and Cameron Fraser address the socioeconomic aspects of robotic performance in the work All of These are Made to be Broken (2016). Using audio recordings made during a documentary expedition to the factories of the Shenzhen Special Economic Zone, the work re-presents the sonic energies of China’s largest manufacturing region for ten computer-controlled paper shredders. On the evening of November 17,

Tyshawn Sorey will perform alongside the shredders, opening up a sonic environment between human and machine. In If one could touch sound, what would it feel like? Heather Frasch invites participants to explore unique and immersive textural spaces with their hands, presenting complex sonic and tactile sensations simultaneously. Aaron Einbond’s Sonic Postcards project focuses instead on interiority and memory. A performed installation with Yarn/Wire percussionist Russell Greenberg, Einbond combines field recordings with noise-based instrumental playing to re-render the acoustic environments of both Mauerpark Berlin and Brooklyn Bridge Park.

Qubit is a contemporary music and performance art initiative founded in 2010 by Alec Hall and BryanJacobs. Its principal mission is to foster the work of emerging composers, and to develop new technologies as they relate to performance practice, sonic aesthetics, and public engagement. Qubit plays a unique role in New York’s contemporary artistic landscape, creating a sustained conversation between experimental forms across disciplines. Current members also include Aaron Einbond and David Bird.