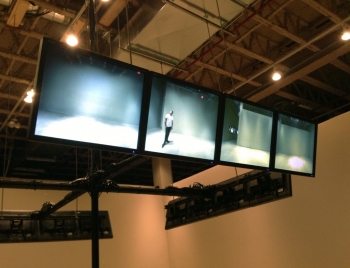 DXARTS faculty member James Coupe has work being exhibited at the Museum of Contemporary Canadian Art in Toronto, Canada from September 4 - December 29, 2013.

Swarm is an installation that identifies people in the museum according to their demographic and segments them into 'clans' in competing versions of the gallery space.

“The reshaping of the human body by modern technology.” – Vaughan, Crash (David Cronenberg, 1996)

In his films, David Cronenberg explores the evolution of new social personalities or types, often the result of technological advancements that lead to mutations, fusions between the human and the non-human, and new understandings of the “social” and the “biological.” For instance, in Scanners and Stereo, humans have developed telekinetic powers; in Crimes of the Future, a dermatological disease has killed all sexually mature women; in VideoDrome humans have developed malignant tumors from television signals; in ExistenZ, immersion in video games prompts an ontological collapse of the virtual and the real; and in his adaptation of J.G. Ballard’s novel Crash, characters develop erotic fascinations with car crashes.

This project takes inspiration from another Ballard novel, High-Rise (1975), a text that features many of Cronenberg’s common themes, and is also reminiscent of Cronenberg’s apartment block-set films like Shivers and Crimes of the Future. In High-Rise, Ballard envisions a new social type that results from living in close proximity in a modern, thousand-resident apartment building. Initially, the residents experience insomnia, and gradually become territorial about shared spaces such as elevators, parking spaces, swimming pools, roof gardens, grocery stores, etc. Eventually, the pressures of isolated yet claustrophobic living causes the residents of the high-rise to form clans, which are organized around class demographics—with the wealthy residing on the top floors, and the working classes on the ground floor. The situation rapidly becomes monstrous, as residents begin killing and raping each other in order to assert control of their environments.

For Ballard, the residents are cool, unemotional, desensitized, with minimal need for privacy and capable of thriving within the closed environment of this “malevolent zoo”:

[The residents had] no qualms about the invasion of their privacy by government agencies and data-processing organizations, and if anything welcomed these invisible intrusions, using them for their own purposes. These people were the first to master a new kind of late-twentieth century life. They thrived on the rapid turnover of acquaintances, the lack of involvement with others, and the total self-sufficiency of lives which, needing nothing, were never disappointed.

Ballard’s description of the paradoxical conditions of isolation and proximity in the High-Rise is analogous to the effects of twenty-first-century Social Media. Virtual environments like Facebook have successfully colonized our social existences, in part because of their efficiency and viral expansion into our daily lives. Users are willing to offer up their privacy to social media systems because they simplify the individual management of our social lives. In return, we are confronted with systems that take control over who we know, what we know about them and how those relationships are framed, remembered, and proceed. As a result, it is not only our bodies that are being reshaped by modern technology, but also our minds; social media technologies involve a redistribution of identities based upon principles of demographic segmentation, social exclusivity, and the illusion of community. Just as in High-Rise, the collision of individual and masses involves a psycho-pathological breakdown, re-mapped by technology.

This installation re-presents the gallery as if it were exclusively occupied by specific demographics of people. As people move through the gallery, their image is profiled, archived, appropriated and inserted into a specific ‘clan’. As they look at the different rows of monitors, they will see these different clans occupying the museum, proliferating in number, assembling and dispersing: a community that appears to be waiting for something to happen, and one that seems intimately familiar.

Each row of monitors shows a panorama of the gallery but occupied by a different group of people – one might be women in their fifties, one might be people of Asian descent, one might be men in their forties, one might be people all dressed in black. The clans are a mixture of live and recorded footage – so a male viewer may find himself appearing to be joined in the museum by a group of men in their forties, with a short vignette of himself, apparently alongside a group of other men, some of whom he has noticed as he walked through the gallery, but most of whom are nowhere to be seen in the actual museum. For subsequent viewers of the same demographic, this viewer may become part of that group.

There is menace inherent in the occupation of a specific space by a single demographic, even more so when that space is a privileged site such as a museum. There is further tension to be found in the parallel occupation of that space by different groupings – some clans are large, some small, all suggesting an impending confrontation. As new people enter the gallery, visitors past and present size them up, waiting to see which clan they will join, and adding to the blend of tension and exclusivity, threat and solidarity pervading the museum.

With thanks to DXARTS, Yi Ding, James Hughes, Tivon Rice and John Robinson.