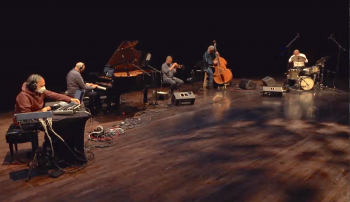 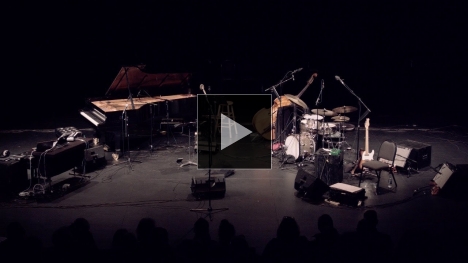 Initially the brainchild of Richard Karpen and Cuong Vu, Indigo Mist has become a vehicle for the musical musings of a group of forward reaching artists with tendencies towards experimentation. Having crossed paths over the years as University of Washington faculty, the group is currently comprised of Cuong Vu (trumpet), Richard Karpen (piano), Juan Pampin (electronics), Ted Poor (drums) and Steve Rodby (bass). Invited into the fold is world-renown tenor saxophone master/improviser George Garzone, whose musical concepts and immense impact has had profound influence on generations of the world's most celebrated jazz saxophonists today. Expect Garzone to push the group into more unchartered territories that promise to be exhilarating.

Saxophonist George Garzone is a member of The Fringe, a jazz trio founded in 1972 that includes bassist John Lockwood and drummer Bob Gullotti, that performs regularly in the Boston area and has toured Portugal. The group has released three albums. A veteran jazzman, George Garzone has appeared on over 20 recordings. He began on the tenor when he was six, played in a family band and attended Berklee College of Music in Boston. In addition, George Garzone has guested in many situations, touring Europe with Jamaaladeen Tacuma and performing with Danilo Perez, Joe Lovano, Jack DeJohnette, Rachel Z and John Patitucci among others.

Garzone is well-known as a sought-after jazz educator, currently teaching at the Berklee College of Music. He has also previously taught at New England Conservatory, Longy School of Music, New York University, Manhattan School of Music, Northeastern University and the New School University.  He has pioneered the Triadic Chromatic Approach, an improvisation concept which has his own signature in the jazz improvisation vocabulary.

The first edition of the Triadic Chromatic Approach was released in DVD format. In 2020 George Garzone is releasing the second part of the Triadic Chromatic Approach and other educational books related with his concept and his music. In his never ending teaching career, great musicians of the actual scene have been students of George Garzone, like Joshua Redman, Teadross Avery, Seamus Blake, Chris Cheek, Luciana Souza, Mark Turner, Donny McCaslin, Doug Yates, Danilo Perez and the Grammy-Winning Drummer Antonio Sanchez, to name a few.

In 1995 he recorded a fine tribute to Stan Getz on NYC called Alone; Four’s and Two’s followed a year later with compatriot Joe Lovano which earned him four stars in Downbeat magazine, and in 1999 Garzone returned with Moodiology. Fringe in New York was released in summer 2000. He is a member of the Grammy-winning Joe Lovano Nonet, and performed and recorded with this group On This Day … Live At The Vanguard in September 2002. In January 2019 George Garzone with Peter Erskine, Alan Pasqua and Darek Oles had a three night concert-recording session which became a Three CD recording called Three Nights in L.A., which became a favorite of many critics like Downbeat Magazine and All about jazz.

Awards and honors that Cuong has garnered include grants from the Royalty Research Foundation, the Donald E. Petersen Professorship, ArtistTrust, 4Culture, CityArts and the Colbert Award for Excellence. Cuong is currently professor and chair of Jazz Studies at the University of Washington and was awarded the University of Washington's prestigious Distinguished Teacher Award in his third year on faculty. In 2002 and 2006, Cuong was a recipient of the Grammy for Best Contemporary Jazz Album as a member of the Pat Metheny Group. He’s been recognized as one of the top 50 Jazz Artists in an article called “The New Masters” from the British magazine, “Classic CD” and in 2006 was named the Best International Jazz Artist by the Italian Jazz Critics’ Society. Amazon listed Vu’s “Come Play With Me” on their “The 100 Greatest Jazz Albums of All Time.”

Richard Karpen is a composer and researcher in multiple areas of music and the arts. His compositions for both electronic media and live performance are widely known, recorded, and performed internationally. Since the early 1980s he has also been in the forefront of the development of computer applications for music composition, interactive performance, and the sonic arts. He is also active as pianist.

Karpen is a Professor of Digital Arts and Experimental Media (DXARTS) and Music Composition at the University of Washington in Seattle. Also at the UW he was founding Director of DXARTS in 2001 and Director of the School of Music from 2009-2020. He has been the recipient of many awards, grants, and prizes, including those from the National Endowment for the Arts, the Bourges Contest in France, and the Luigi Russolo Foundation in Italy. Karpen has composed works for many leading international soloists, such as soprano Judith Bettina, violists Garth Knox and Melia Watras, trombonist Stuart Dempster, flutists Laura Chislett and Jos Zwaanenberg, guitarist Stefan Östersjö, and ensembles such as The Six Tones, JACK Quartet, The Seattle Symphony, and the Harry Partch Ensemble. Karpen is a founding member, with Cuong Vu, of the experimental improvisation ensemble Indigo Mist. As a pianist, Karpen has performed and recorded with Cuong Vu, Bill Frisell, Ted Poor, Steve Rodby, and others. Karpen's compositions and performances have been recorded on a variety of labels including Wergo, Centaur, Neuma, Le Chant du Monde, DIFFUSION i MeDIA, Fleur du Son, Capstone, and RareNoise.

As an in-demand sideman, Ted has appeared on dozens of recordings and has shared the stage with many world renowned artists such as Kurt Rosenwinkel, Bill Frisell, Mark Turner, Chris Potter, Kenny Werner, Maria Schneider, Aaron Parks and Ralph Alessi. As a guest soloist and educator, Poor has held residencies at, among others, the Eastman School of Music, Berklee College of Music, Cal Arts, Lawrence University, the University of Oregon, and the HR Big Band of Frankfurt.  He is currently an Assistant Professor at the University of Washington in Seattle.

Acoustic and electric bassist, audio and video editor and producer Steve Rodby was born in Joliet, Illinois. He began studying classical orchestral bass at age 10, and quickly developed parallel interests in pop and jazz. A graduate of Northwestern University with a degree in classical bass performance, Steve spent many years as a multi-style studio musician on both acoustic and electric bass in Chicago recording studios, while also playing with the leading contemporary classical chamber music group in the city, the University of Chicago CCP. Playing regularly at the Jazz Showcase also gave him the opportunity to play with numerous jazz masters. In 1981, Steve joined the Pat Metheny Group, and would play with the PMG for 3 decades. Steve also started, in the early 80s, producing records for the PMG and many others, as well as working as a video editor for both PBS music specials and other music DVDs. In all, Steve has won 15 Grammy awards. Recently, Steve has been touring and recording with the international group The Impossible Gentlemen.

Juan Pampin is Professor of Music Composition at University of Washington and founding faculty member of the Department of Digital Arts and Experimental Media (DXARTS), for which he currently serves as Chair. He received an MA in Composition from Conservatoire National Supérieur de Musique de Lyon, France, and a DMA in Composition from Stanford University, where he studied with composer Jonathan Harvey.

Juan Pampin's music compositions –including pieces for instrumental, electronic, and mixed media– have been performed around the world by world-class soloists and ensembles. His “Percussion Cycle” –recorded by Les Percussions de Strasbourg– has been released on CD by Sargasso Records, London, and his piece “On Space” –for percussion sextet and 3D electronic sounds– was included in the group’s 50th anniversary historical edition box published by Universal France.

Pampin has recently collaborated with composer Richard Karpen and the JACK Quartet to create “Human Subjects”, a large-scale composition exploring new extended performance techniques based on brain and nervous system sensing. This project was hosted by the Meany Center for the Performing Arts and was made possible through the UW Creative Fellowships Initiative with funding from the Andrew W. Mellon Foundation.

The University of Washington School of Music and the Center for Digital Arts and Experimental Media (DXARTS) co-sponsor the Music of Today concert series featuring groundbreaking modern classics and new works by student, faculty and guest composers.