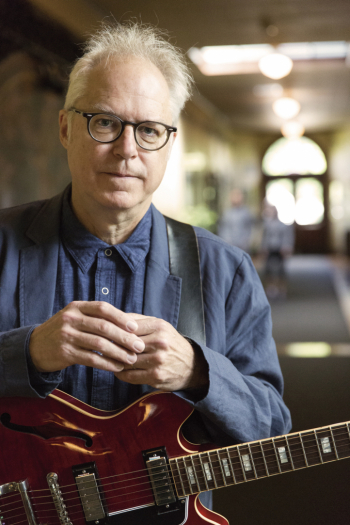 "It's hard to find a more fruitful meditation on American music than in the compositions of guitarist Bill Frisell. Mixing rock and country with jazz and blues, he's found what connects them: improvisation and a sense of play. Unlike other pastichists, who tend to duck passion, Mr. Frisell plays up the pleasure in the music and also takes on another often-avoided subject, tenderness." - The New York Times

This work has established Frisell as one of the most sought-after guitar voices in contemporary music. The breadth of such performing and recording situations is a testament not only to his singular guitar conception, but his musical versatility as well. This, however, is old news by now. In recent years, it is Frisell's role as composer and band leader which has garnered him increasing notoriety.

Much has been made of the uncategorizable nature of Frisell's music and the seamlessness with which his bands have navigated such a variety of styles. "Frisell's pals just happen to be superb musical chameleons, up to every change of gears and genre the guitarist's catch-all music throws at them. The band even comfortably follows the leader onto Country and Western turf, as Frisell often approximates the whine of a lonely steel guitar." (Minneapolis Star Tribune). Bill's comments to the same publication: "When I was in Colorado, I never really played that country stuff or even liked it that much, though it was all over the radio. But as I got older, it crept into my music a lot." In fact, the Chicago Tribune observed that "Frisell possesses not only impressive compositional skills but also a remarkable ability to encompass seemingly antagonistic musical genres." Commenting on his eclectic compositional inclinations, Frisell told Down Beat: "When I write something, it just sort of comes out. I'm not thinking, 'Now I'm going to write a cowboy song'. It just happens, then I usually think about what must have influenced it later. When I sit down to write something in a certain style, it doesn't work. I don't know if that's important or something I need to do, or if it doesn't matter. I don't care; I'm just thankful something comes out sometimes."

This musical kinship with Miles Davis has been cited repeatedly in the music press. The New Yorker notes: "Bill Frisell plays the guitar like Miles Davis played the trumpet: in the hands of such radical thinkers, their instruments simply become different animals. And, like Davis, Frisell loves to have a lot of legroom when he improvises--the space that terrifies others quickens his blood."

Awards and honors that Cuong has garnered include grants from the Royalty Research Foundation, the Donald E. Peterson Professorship, ArtistTrust, 4Culture, CityArts and the Colbert Award for Excellence.  Cuong is currently associate professor and chair of Jazz Studies at the University of Washington and was awarded the University of Washington's prestigious Distinguished Teacher Award in his third year on faculty. In 2002 and 2006, Cuong was a recipient of the Grammy for Best Contemporary Jazz Album as a member of the Pat Metheny Group. He’s been recognized as one of the top 50 Jazz Artists in an article called “The New Masters” from the British magazine, “Classic CD” and in 2006 was named the Best International Jazz Artist by the Italian Jazz Critics’ Society. Amazon listed Vu’s “Come Play With Me” on their “The 100 Greatest Jazz Albums of All Time.”

Richard Karpen is a composer and researcher in multiple areas music and the arts. His compositions for both electronic media and live performance are widely known, recorded, and performed internationally. Over the last 30 years he has also been one of the leading pioneers in the development of computer applications for music composition, interactive performance, and sonic arts. He has recently returned to the stage as a pianist.

Karpen is currently Director of the School of Music at the University of Washington where he is also a Professor of Music Composition. He previously served at the UW as Divisional Dean for Research in the College of Arts and Sciences and Founding Director of the Center for Digital Arts and Experimental Media (DXARTS). He has been the recipient of many awards, grants, and prizes including those from the National Endowment for the Arts, the ASCAP Foundation, the Bourges Contest in France, and the Luigi Russolo Foundation in Italy. Fellowships and grants for work outside of the United States include a Fulbright to Italy, a residency at IRCAM in France, and a Leverhulme Visiting Fellowship to the United Kingdom. He received his doctorate in composition from Stanford University, where he also worked at the Center for Computer Research in Music and Acoustics (CCRMA). Karpen is a native of New York, where he studied composition with Charles Dodge and Gheorghe Costinescu.

Karpen has composed works for many leading international soloists such as soprano Judith Bettina, violist Garth Knox, trombonist Stuart Dempster, flutists Laura Chislett and Jos Zwaanenberg, guitarist Stefan Ostersjo, and oboist Alex Klein. Along with numerous concert and radio performances, his works have been set to dance by groups such as the Royal Danish Ballet and the Guandong Dance Company of China. Karpen's compositions have been recorded on a variety of labels including Wergo, Centaur, Neuma, Le Chant du Monde, DIFFUSION i MeDIA, Fleur du Son, and Capstone.

As an in-demand sideman, Ted has appeared on dozens of recordings and has shared the stage with many world renowned artists such as Kurt Rosenwinkel, Bill Frisell, Mark Turner, Chris Potter, Kenny Werner, Maria Schneider, Aaron Parks and Ralph Alessi. As a guest soloist and educator, Poor has held residencies at, among others, the Eastman School of Music, Berklee College of Music, Cal Arts, Lawrence University, the University of Oregon, and the HR Big Band of Frankfurt.  He is currently an Artist in Residence at the University of Washington in Seattle.

Acoustic and electric bassist, audio and video editor and producer Steve Rodby was born in Joliet, Illinois. He began studying classical orchestral bass at age 10, and quickly developed parallel interests in pop and jazz. A graduate of Northwestern University with a degree in classical bass performance, Steve spent many years as a multi-style studio musician on both acoustic and electric bass in Chicago recording studios, while also playing with the leading contemporary classical chamber music group in the city, the University of Chicago&#39;s CCP. Playing regularly at the Jazz Showcase also gave him the opportunity to play with numerous jazz masters. In 1981, Steve joined the Pat Metheny Group, and would play with the PMG for 3 decades. Steve also started, in the early 80s, producing records for the PMG and many others, as well as working as a video editor for both PBS music specials and other music DVDs. In all, Steve has won 15 Grammy awards. Recently, Steve has been touring and recording with the international group The Impossible Gentlemen.

Juan Pampin (b. Buenos Aires, 1967) is Associate Professor of composition at University of Washington and founding faculty member of the Center for Digital Arts and Experimental Media (DXARTS) for which he currently serves as Associate Director. Pampin received an MA in Composition from Conservatoire National Supérieur de Musique de Lyon, France and a DMA in Composition from Stanford University, where he studied with composer Jonathan Harvey. Juan Pampin's works explore the territory articulated by the concepts of space, memory, and material, using algorithmic composition and signal processing tools of his own development. Juan Pampin's music compositions, including works for instrumental, digital, and mixed media, have been performed around the world by world-class soloists and ensembles. His work "On Space" –for percussion sextet and 3D electronic sounds– has been recently released on CD as part of Les Percussions de Strasbourg 50th anniversary historical edition box published by Universal France.
People Involved:
Richard Karpen
Juan Pampin
Cuong Vu
Event Type: