Starting Monday, March 9, classes will no longer be meeting in person. Instructors will contact students with details regarding remote lectures, grading, and final projects.The DXARTS main office will move online until March 30. Remote advising appointments can be made by contacting dxarts@uw.edu Monday-Friday from 9am-5pm. 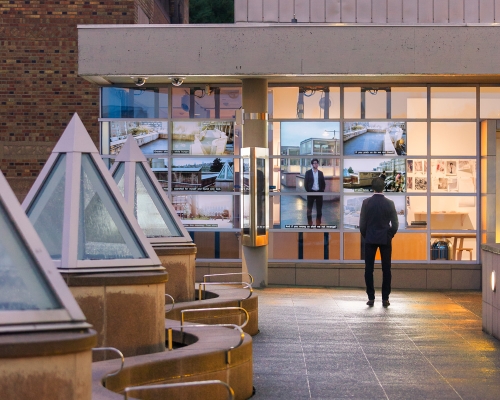 Sanctum is a public art work that uses the persistent flow of people around the Henry Art Gallery as input, extracting narratives from the demographics of passers-by and the patterns of their movement. The flow of people is used as a physical analogue to another type of crowd, the virtual inhabitants of social networks such as Facebook.

As a person approaches the gallery, they are tracked, analyzed and recorded by video cameras programmed to identify people according to their age and gender. They hear a cacophony of voices, all telling stories. As they get closer to the gallery, the voices become clearer, gradually becoming a single voice that matches their age and gender, and telling a story composed from demographically-appropriate Facebook status updates. A grid of 18 large video monitors on the façade of the gallery picks their face out of the crowd, automatically integrating footage of them with a variety of live and pre-recorded footage from around the gallery façade.

The installation aims to create a locus of complex and intense social networking activity, reaching out of the gallery to embed the passer by. As unexpected flâneurs, people passing by the Henry are assaulted by a multitude of voices, videos and text, of which, as they approach the façade, they will eventually become the focal point.

Join the Sanctum Facebook application. By joining, your Facebook status updates will become content for Sanctum's narrative system. All posts that you make to Facebook will remain anonymous - they will be tagged with age and gender, but no other personal data will be used. If you visit Sanctum at the Henry Art Gallery, you can potentially see your status updates used as parts of the stories that are generated.