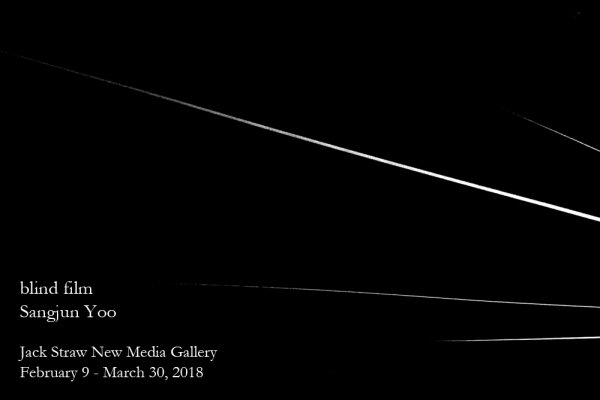 An installation by Sangjun Yoo

Employing real-time composition of a kinetic system based on common window blinds, controlled by a digital interface, blind film attempts to reconfigure familiar subjects that constantly change and repeat in everyday life but can come to us like unrefined feelings and traces.

This project began with a look at a window blind. An unknowable glimpse of light formed a mediating figure between the moment of occurrence and the moment of observation, then collapsed into the recognition of unfixed experience as an open constellation, porous to contingencies. blind film embraces the capacities of intimacy based on absence, distance, and ruptures of time and space that reconstruct actual and virtual spaces as well as the viewer. It affords a complex sensory experience by stepping aside from the event to look at it from a temporal distance, and over time.

Sangjun Yoo is a graduate student in the DXARTS Ph.D. program at the University of Washington. He holds an MFA in Art from the State University of New York at Buffalo and two BFA degrees in Design and Technology at Parsons the New School and Multimedia Design at Hansung University in South Korea. Sangjun’s work has been most influenced by his experiences of travel, which have included media-art certification at the Academy of Media Arts in Cologne in Germany and artist residencies in multiple locations. These experiences have inspired the strain of his current work in installation and new media art, which is influenced by phenomenology and infused with an account of existence. Sangjun regularly exhibits his work internationally. His solo and group exhibitions include Kobe Biennale 2013 in Japan, Zentrum fur Kunst Medien in Karlsruhe, Germany, Culture Hub Art & Technology Center in NYC, Governor’s Island International Art Fair, FILE2015 in Sao Paulo, Brazil and Kumho Art Museum in Seoul.