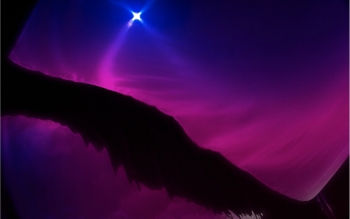 An Artist Talk is scheduled for Thursday April 30th, 6-8pm.

Distant Light is a new-media installation with a real-time interactivity by Sang Jun Yoo.

“Light, for all the visual clarity it imparts, can be quite elusive. It seems very evident in terms of revealing objects, however, it is not usually noticed because we see things reflected against it. When I look toward the sun, normally, everything in my vision turns into visible and invisible. This is nature's rule: an object is only visible when light reflects it. Under a light source, every subject is illuminated in human perception because light amplifies our vision. Ultimately, the relationship between light and shadow becomes the threshold of human perception.”

Artist Statement
I hear a tree in the wind at night. The tree sounds like one huge mass. The individual leaves are obscured into one whole. What I know as a tree is not what I perceive in the darkness. For a moment it is not a tree, my inability to identify the mass breaks the sequential moments of memory, and reality becomes continuity.

As I always observe the happenings around me, I put a special attention on connections between humans, objects and something that cannot be recognized in those assemblages. We are the separated beings against the natural and the artificial spaces, but we communicate and share to other self-motivated beings on earth about the way we look and feel. Not because we are socialized animals or just lonely beings, but realizing that we share the moments of our lives in a fate of mortality despite individual differences and backgrounds. And each perspectives and relationships depart from individual intentions that reveal the layers of self-projected or socially shared value, but sometimes nature itself drives self-consciousness of living beings. Imagine you are looking outside of the window, you will find an overlapped image of landscape and self in the glass. Then you may realize the oscillating mind that transcends self-consciousness over the reflected presence in natural physics. This invites you to reveal almost schizophrenically in its surface, whereas in its exposure of illusional appropriation asks you to look through its surface critically: as the reality is presented overwhelmed by appearances.

In a variety of natural phenomena and metaphysical conception in reality, I want to sharpen the following question: in a limited boundary of time and space, why are we longing ‘the other side’ of reality, somewhere over the physical distance, somewhere we could see our progressions in time? My work investigates what is at issue that defies human perception, focusing on ‘time and space’ rather than a condensation of figures and riddles of history and culture. I focus on immediate connections at the boundaries of minds, contemplation over the process in history and natural influence. Rather than finding a specific form those bordering or distancing reflections in artificial strength, which lies in a refusal to look directly, I try to find a ‘light’ from the distance, or a ‘ghost’ that removes a weight of body and soul, to open one’s consciousness to the present moment. I will continue to find unseen or hidden aspect of our lives, with nonlinear plots, but improvised conversations about transcendence that celebrates humanity over memories in the past.

Sang Jun Yoo is a graduate student in DXARTS Ph.D program at the University of Washington. He holds a MFA in Art with honors from the State University of New York at Buffalo and two BFA degrees in Design and Technology at Parsons the New School and Multimedia Design at Hansung University in South Korea. Sangjun regularly exhibits his work internationally, with international group exhibitions including those in South Korea, Japan, New Zealand, and Germany amongst others. The artist’s solo and group exhibitions have among them those at Kobe Biennale 2013 in Japan, Zentrum fur Kunst Medien in Karlsruhe, Germany, Culture Hub Art & Technology Center, Governor’s Island International Art Fair in NYC, FILE2015 in Sao Paulo, Brazil and Kumho Art Museum in Seoul.

This work was made possible by the support of the Center for Digital Arts and Experimental Media (DXARTS), University of Washington.