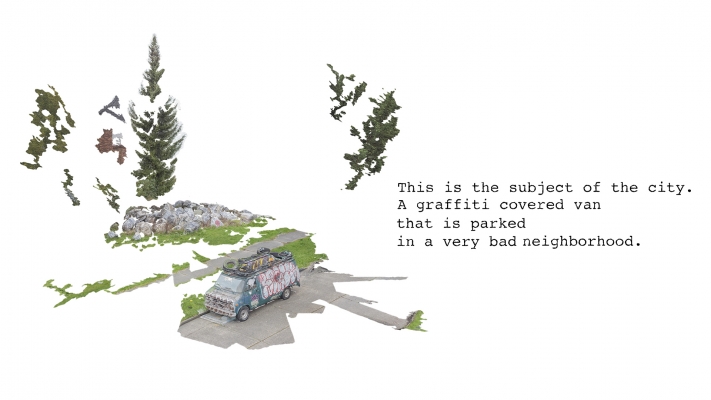 The images in this exhibition represent Rice’s studies of Seattle’s rapid change. As many sites and landscapes in the city disappear, a new kind of visuality emerges; one shaped by economic forces, the influx of tech, and developments that often favor these interests rather than those of the diverse communities that call Seattle home.

In Façades, these scenes and locations are explored through a digital process – photogrammetry – which generates a virtual 3D model by analyzing hundreds of two- dimensional photos. In order to access all possible perspectives, many of the photos were captured using a drone, an airborne camera funded by 4Culture’s 2015 Tech Specific grant.

The models that result from photogrammetry can then be scaled, rotated, inverted, animated, textured, or rendered as a wireframe. This act of virtualizing a space, which often creates a glitchy, hollow, or flattened shell of the original site, seems similar to many of the large-scale image-making processes at work in the city: regrading, demolition, faux preservation, façadism.

In Drone Triptychs, accompanying texts further explore a virtual or uncanny representation of Seattle’s image. Working in collaboration with Google AMI (Artists and Machine Intelligence), a computer was trained to “speak” by analyzing over 250,000 documents from Seattle’s Department of Planning and Development. Ranging from design proposals and guidance, to public comments and protest, the vocabulary that resulted from this training was used by the software to automatically generate captions and short stories about each photo. In these stories, the “voices” of city planners and the public are put into a virtual dialogue (or argument) with each other as they describe each scene.

Rice wishes to thank the numerous organizations that helped make this work possible: Mithun, Google AMI – Artists and Machine Intelligence, 4culture’s Tech Specific and Individual Artist grants, The Henry Art gallery and participants of the Surface City workshop (who helped photograph Sous Brutalisme), the Seattle Office of Arts and Culture, Pilchuck School of Glass, and DXARTS – the University of Washington’s Center for Digital Art and Experimental Media. The Drone Triptych series is sponsored by Google Inc.