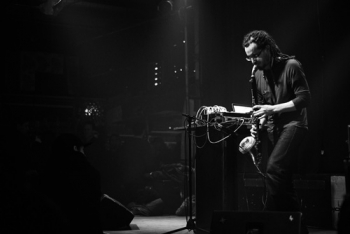 Closing a 3-month artist residency in Vienna with KulturKontakt Austria and the Austrian Federal Ministry for Education, the Arts and Culture, Stelios Manousakis will perform a solo concert at IEM's Open CUBE in Graz. The concert features 3 of his recent feedback-based / cybernetic compositions (part of his research at DXARTS), and will be proceeded by a lecture about his work and some of the context, ideas and techniques behind it.

Stelios Manousakis (GR/NL/US) is a composer, performer, sound artist and researcher. He operates across the convergence zones of art, science and engineering - composition, performance and installation - the rich tradition of Western art music and ‘digital folk’ idioms. His work is visceral yet cerebral, communicating through pure, raw experience while being complex and multilayered. His output extends from music compositions – most often with live electronics - to intermedia and sound art installations, to fixed medium pieces and film music. Many of these works merge algorithmic finesse with the expressivity of improvisation, or the immediacy of audience participation. They are often designed as emergent (eco)systems or organisms, unearthing rich and organic worlds through artistic reinventions of models from complexity science, cybernetics, biology and game theory. His work has been shown in various festivals and venues across Europe and the Americas. Besides his solo work, he is a founding member of several music ensembles and multimedia groups. Stelios is in the process of finishing a PhD at the Center for Digital Arts and Experimental Media (DXARTS, University of Washington, Seattle, USA).

Other selected activities during Stelios Manousakis' residency in Austria include