An Evening With The Jack Quartet 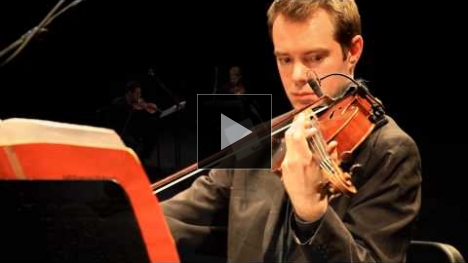 The JACK Quartet performs world premieres by UW composers Juan Pampin and Richard Karpen. Highlights include the world premieres of "Respiración Artificial," by Juan Pampin, Director of the Center for Digital Arts and Experimental Media, (DXARTS) and School of Music composition faculty, performed by the JACK Quartet and Mirta Wymerszberg on bandoneon; and “Elliptic,” by School of Music Director Richard Karpen, performed by the JACK Quartet and musicians from the Six Tones—Thanh Thuy and Ngo Tra My from Hanoi, Vietnam, and Stefan Östersjö from Malmo, Sweden.

Respiración Artificial (Artificial Breathing) is a piece for bandoneon, string quartet and electronics written for Mirta Wymerszberg and the JACK Quartet. Rather than treating the bandoneon as a soloist, the piece integrates the instrument with the string quartet, creating a meta instrument whose sound is transformed gradually over the length of the piece. The timing of the piece is provided by the "breathing" of the bandoneon, whose bellows can open over a meter wide and produce extremely powerful sounds. The electronics also play a key role in the piece both as catalyst for the spectral blending process (using my ATS spectral modeling system), as well as spreading sound in the space by means of ultrasonic sound beams. This technology, developed in my DXARTS lab, allows the formation of highly focalized beams of sound that can be dynamically moved around the space by electronic means. This will be the first time this technology is used in a concert.

I have worked with the Six Tones (the Vietnamese master musicians Ngo Tra My and Nguyen Thanh Thuy and Swedish guitarist Stefan Östersjö) on a few large-scale pieces including Idioms (a theater work for the trio with the addition of three actors, and live electronics) and more recently Seven Stories (a feature-length dance film). I have also worked previously with the JACK Quartet to create Aperture II, a work for string quartet and live electronics. As in my previous works with the Six Tones, the music that the musicians play in Elliptic was created through a deeply and mutually enriching collaborative process that we have developed together over the years. A similar approach marks my collaboration with the JACK Quartet.

Note:  Richard Karpen and the Six Tones have also collaborated to create Nam Maí, a new work that will be premiered in March 21, 2014 by Seattle Symphony (conducted by School of Music alumna Julia Tai) on its Celebrate Asia series.

The JACK Quartet electrifies audiences worldwide with "explosive virtuosity" (Boston Globe) and "viscerally exciting performances" (New York Times). David Patrick Stearns (Philadelphia Inquirer) proclaimed their performance as being "among the most stimulating new-music concerts of my experience." The Washington Post commented, "The string quartet may be a 250-year-old contraption, but young, brilliant groups like the JACK Quartet are keeping it thrillingly vital." Alex Ross (New Yorker) hailed their performance of Iannis Xenakis' complete string quartets as being "exceptional" and "beautifully harsh," and Mark Swed (Los Angeles Times) called their sold-out performances of Georg Friedrich Haas' String Quartet No. 3 In iij. Noct. "mind-blowingly good."

JACK has led workshops with young performers and composers at Princeton University, Yale University, Harvard University, New York University, Columbia University, the Eastman School of Music, Oberlin Conservatory, Manhattan School of Music, June in Buffalo, New Music on the Point, and at the Darmstadt Internationale Ferienkurse für Neue Musik. In addition to working with composers and performers, JACK seeks to broaden and diversify the potential audience for new music through educational presentations designed for a variety of ages, backgrounds, and levels of musical experience.

The members of the quartet met while attending the Eastman School of Music and studied closely with the Arditti Quartet, Kronos Quartet, Muir String Quartet, and members of the Ensemble Intercontemporain.

The Vietnamese language is a tonal language. It uses six tones, or intonations, which may give the same utterance a different meaning. The composition 'The Six Tones' is the fruit of a close collaboration between Henrik Frisk, Stefan Östersjö, Than y and Ngo Tra My which took its beginning in April 2006. The intention was to the optimal conditions for an open meeting between different cultures on equal terms. At the outset we attempted to get beyond a collage-like superimposition of typical elements from the two cultures, but rather to strive for a more experimental sound. A series of collective improvisations based on some material originally put forward for the guitar and electronics piece 'Repetition Repeats all other Repetitions' written for Stefan Östersjö, formed the basis for the composition. After many s and negotiations and further improvisations the piece found its final form at the first performance in Hanoi in October 2006. The four string instruments, dan tranh (a traditional Vietnamese zither), dan bau (a single string, electrically amplified Vietnamese traditional instrument, banjo (plucked as well as played with e-bow) and 10-stringed guitar are electronically manipulated in the computer part, which also contains some prepared material.

'The Six Tones' is dedicated to the Vietnamese master musicians Nguyen Thanh Thuy and Ngo Tra My.

Richard Karpen is a composer and researcher in multiple areas music and the arts. His compositions for both electronic media and live performance are widely known, recorded, and performed internationally. Over the last 30 years he has also been one of the leading pioneers in the development of computer applications for music composition, interactive performance, and sonic arts. He has recently returned to the stage as a pianist.

Karpen is currently Director of the School of Music at the University of Washington where he is also a Professor of Music Composition. He previously served at the UW as Divisional Dean for Research in the College of Arts and Sciences and Founding Director of the Center for Digital Arts and Experimental Media (DXARTS). He has been the recipient of many awards, grants, and prizes including those from the National Endowment for the Arts, the ASCAP Foundation, the Bourges Contest in France, and the Luigi Russolo Foundation in Italy. Fellowships and grants for work outside of the United States include a Fulbright to Italy, a residency at IRCAM in France, and a Leverhulme Visiting Fellowship to the United Kingdom. He received his doctorate in composition from Stanford University, where he also worked at the Center for Computer Research in Music and Acoustics (CCRMA). Karpen is a native of New York, where he studied composition with Charles Dodge and Gheorghe Costinescu.

Karpen has composed works for many leading international soloists such as soprano Judith Bettina, violist Garth Knox, trombonist Stuart Dempster, flutists Laura Chislett and Jos Zwaanenberg, guitarist Stefan Ostersjo, and oboist Alex Klein. Along with numerous concert and radio performances, his works have been set to dance by groups such as the Royal Danish Ballet and the Guandong Dance Company of China. Karpen's compositions have been recorded on a variety of labels including Wergo, Centaur, Neuma, Le Chant du Monde, DIFFUSION i MeDIA, Fleur du Son, and Capstone.

Juan Pampin is Associate Professor of Music Composition at University of Washington and founding faculty member of the Center for Digital Arts and Experimental Media (DXARTS), for which he currently serves as Director. He received an MA in Composition from the Conservatoire National Supérieur de Musique de Lyon, France and a DMA in Composition from Stanford University, where he studied with composer Jonathan Harvey. Juan Pampin’s music explores the concepts of memory and materiality through the use of algorithmic and signal processing tools of his own development. His compositions, including pieces for instrumental, digital, and mixed media, and have been performed around the world by world-class soloists and ensembles such as Les Percussions de Strasbourg, the JACK Quartet, Sinfonia 21, Susana Kasakoff and Melia Watras. A recording of his piece On Space, for six percussionists and 3D electronic sounds, has been recently released as part of the Les Percussions de Strasbourg 50th Anniversary Edition CD box published by Universal Music France.

An accomplished flutist, bandoneon player and vocalist, Seattle musician Mirta Wymerszberg, a native of Buenos Aires, brings extensive experience in authentic tango music from Argentina, where she received her musical education and performed classical and tango music. She earned a bachelor's degree in flute performance at the Conservatory of Buenos Aires, as well as a degree in baroque flute performance and chamber music in Lyon, France. She moved to California in 1995, where she co-founded, performed and recorded with tango duo Flor de Tango and continued to develop her career in baroque music with faculty of the Music Department at Stanford University. After obtaining a Master of Arts degree in flute performance at UC Santa Cruz she moved to Seattle, WA, where she founded tango band La Luciérnaga. She studied bandoneon with Victor Hugo Villena and Rodolfo Daluisio. Mirta has been involved in several recording projects with tango musicians in Buenos Aires, and recently participated in the CD recording of Figuración de Gabino Betinotti, by composer Pablo Di Liscia and poet Oscar Steimberg, with tango singer Brian Chambouleyron.

The Late Show: Improvised Music by the JACK and UW musicians