ILLUSION, a performance-based sound installation by Haein Kang, at ICMC and IEEE-GEM conferences 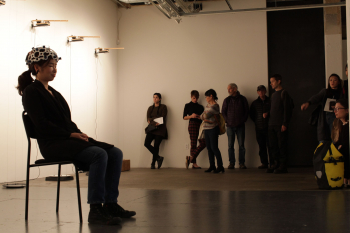 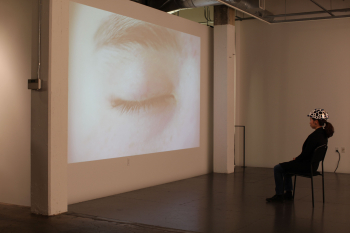 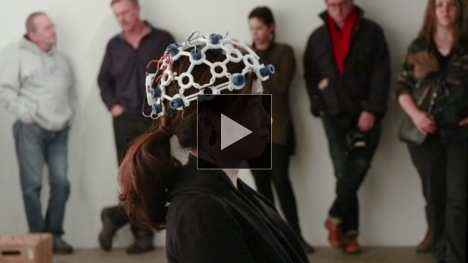 ILLUSION is a performance-based sound installation, which is activated by neural activities and produces rhythmic sounds.
A performer sits in the middle of a room wearing an EEG(electroencephalography) headset. Custom mechatronic devices are behind the performer and a projection of an eye in the front. When the performer closes their eyes, a particular frequency electric potentials trigger in the visual cortex and actuate the mechatronic instruments to play cadenced sounds, an exterior manifestation of the performer’s internal state.

The electrophysiological response of the brain is a substance of mental activity, and this project uses the neural signal as a medium of art by employing the EEG-based brain-computer interface(BCI). With current BCI technology, we cannot identify the emotion. However, we can detect whether you are aware of limb movements or visual information. When you relax and block visual details while you are conscious, approximately 8-13 Hz electrophysiological signals appear in the visual cortex, which is called the posterior dominant rhythm (PDR) in neurology. In the project, the performer’s PDR activates the cellular automata algorithm to produce rhythmic sounds reminiscent of raindrops.

Blinking, the simple movement of closing and opening your eyes divide the visual world into light and darkness. The BCI system turns the repetitive gesture into the musical rhythm. When you close your eyes, you can see the world imaged by sounds. ILLUSION is an instrument propelled by the mind and the experience of a moment of obscurity.