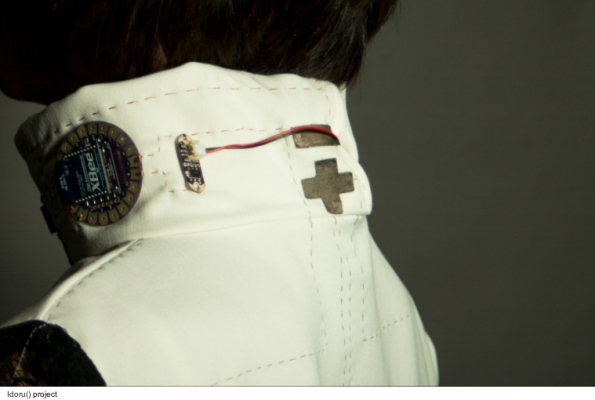 "Sensing the Invisible", by Federica Fontana

In 2011 Afroditi Psarra – Athens born artist and scientist with an incurable passion for cyberpunk literature and a soft spot for traditional crafting techniques, realized a self-made fabric synthesizer and played it in a live performance. As a result of her experimentations with LilyPad Arduino white noise generators, its name was Lilykord – part of an ongoing series calledLilytronica – and it was one of the first outcomes of her constantly evolving research in open-source sensitive wearables with embroidered electronics.

Two years later Psarra presented an interactive sound performance called Idoru(), which is meant to transform the human body into an interface through a particular non-pervasive electronic garment sewed with sensors. With its minimal retro-futuristic allure, the dress translates into frequencies and data every movement of the performer within the space and then converts them into sound. Thanks to a LilyPad Arduino microprocessor, a Xbee wireless antenna, a conductive thread and fabric, and a little over, the performer is able to create an immersive soundscape to be physically experienced by the viewers.

Over and over Psarra has been contributing to push further body augmentation research blending folk tradition, pop culture, hand-made electronic and coding to create art, conveying also social, biological, and environmental issues. Through fascinating and dystopic garments like Divergence, Soft^Articulations, and Fractal Antennae, she could turn the human body into a radiation collector, detecting all the invisible waves that silently surround and affect us – i.e. radio waves, wi-fi or electromagnetism and making them perceivable through light, vibrations or sound feedbacks.