UW Perspectives: Marcin Pączkowski. A Marriage of Music and Motion. 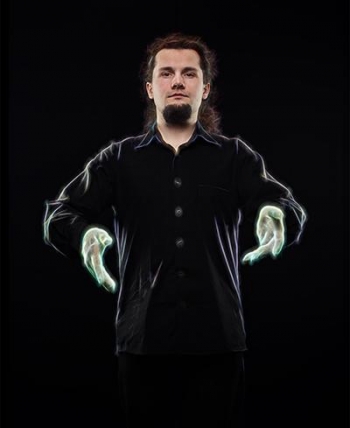 UW Perspectives magazine has featured DXARTS Ph.D. student Marcin Pączkowski in the article by Nancy Joseph "A Marriage of Music and Motion".

"In his current work, Pączkowski uses wireless sensors, attached to his palms, to alter sounds. Individual gestures trigger specific musical changes, such as adding a layer of instrumentation or creating a “scratch” effect similar to a DJ scratching a record on a turntable. Using dozens of gestures that generate programmed responses, Pączkowski is able to shape music in real time."

"The first piece Pączkowski composed using an accelerometer was a collaboration with a dancer; he has since composed a piece for a seven-member ensemble, a percussion solo, and a work he performs himself without an instrument."

“Using the sensors is a way for me to reintroduce some of the performative aspects of conducting into my creative work, using movements that are heavily rooted in my conducting practice,” he says. “The performance is somewhere between conducting and playing this invisible instrument.”

Full article is available at: https://artsci.washington.edu/news/2016-03/marriage-music-and-motion?utm_source=perspectives&utm_medium=email&utm_campaign=Mar-16