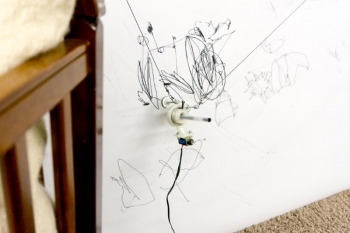 Gallery4Culture: Robert Twomey, The Serious Business of Children and Matthew Whitney: A Line Amongst Other Lines

Gallery4Culture is pleased to present Seattle-based artists Robert Twomey and Matthew Whitney in solo installations that investigate elemental ideas about language and movement utilizing, in the case of Twomey, the tools of advanced computational systems and, for Whitney, GPS tracking.

Robert Twomey’s room-scale mechatronic installation, The Serious Business of Children, examines issues of meaning and expression from the oblique angle of children's pre-language. Twomey populates his room with a number of speaking, listening, and drawing machines that communicate with one another using synthesized voices and drawings in a process of continuous translation from word to image. Audio recordings and children’s drawings are the raw material of the system. They are analyzed by computer and re-synthesized by machines. The project uses children’s early expressions as protolanguage, unintelligible in any conventional sense, but communicative in other registers.

Robert Twomey’s project was inspired by the notable American philosopher John Rogers Searle. Searle, whose expertise was in the philosophy of language, developed the “Chinese room” argument to challenge the popular idea called “strong” artificial intelligence, that it’s possible for a computer running a program to have a “mind” or “consciousness” (think Hal in 2001).