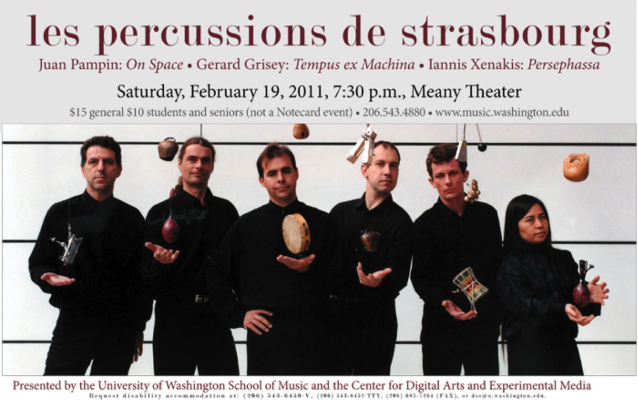 The School of Music and the Center for Digital Arts and Experimental Media (DXARTS) present a special appearance by Europe’s leading percussion ensemble, Les Percussions de Strasbourg, as part of their 50th anniversary North American tour. The program will include Tempus ex Machina by Gérard Grisey and Persephassa, by Iannis Xenakis—two master pieces commissioned by the group that require the players to perform surrounding the audience. The program will also include a performance of On Space, a work for percussion sextet and 3D sound composed for the group by School of Music professor Juan Pampin.

Please Note: Due to the stage set-up for this concert, seating is extremely limited. Advanced ticket purchase is recommended.

PROGRAM NOTES
Tempus Ex Machina (1979) –– Gérard Grisey
Tempus Ex Machina is essentially a study of time. The pitch of the skins, woods and metals, extremely schematized and quickly detected by the ear, allow an acute concentration on the temporal structure. The piece is a blueprint from which color is reduced to the strictly necessary: only the form emerges, and the least error is fatal.

Like in most of my other works, the material is almost sublimated into a pure sound flux. Thus, the rhythms of the initial sequence are not to be taken as a cell, but rather as a vehicle of time: periodicity, acceleration and deceleration are only three poles between which the discourse oscillates, cutting a path between the similar and the different, towards the interior of sound.

This slow journey from the macrophony towards the microphony determines the form of Tempus Ex Machina, truly a time-dialation machine, in which the zoom effect lets us perceive the grain of sound, and therefore the sound matter in itself.

Thus, the last perceived sounds of the piece are the same strokes of
the Bass Drums and Log Drums from the beginning of the score, but
dilated in extreme, allowing us to capture the inaudible: transients,
partials, beatings… the body of sound.

After much meandering, we reached the end of the journey: the other side of the mirror.
–– Gérard Grisey

Persephassa (1969) - Iannis Xenakis
Persephassa is a piece for six percussionists composed by Iannis Xenakis in 1969. The piece was commissioned for the first-ever Shiraz Festival (organized by the Empress of Iran), held at the historic desert site of Persepolis. The title refers to the goddess Persephone, "the personification of telluric forces and of transmutations of life."

Persephassa gains much of its effect from having the six percussionists distributed around the audience. The treatment of space as a musical parameter is one of the most important preoccupations of Xenakis’ music, particularly in his works of the mid-to-late 1960’s. The dramatic impact of utilizing the performance space in this manner is evident in many passages throughout the piece in which accents or imitative rhythms are passed around the ensemble.

The percussionists use a wide range of instruments and sound effects during the piece, including sirens, maracas, and pebbles, along with an arsenal of drums, wood blocks, cymbals, and gongs.

On Space (2000/2005) –– Juan Pampin
"The pleasure of space: This cannot be put into words, it is unspoken. Approximately: it is a form of experience --the "presence of absence"; exhilarating differences between the plane and the cavern, between the street and your living-room; the symmetries and dissymmetries emphasizing the spatial properties of my body: right and left, up and down. Taken to its extreme, the pleasure of space leans toward the poetics of the unconscious, to the edge of madness."
--Bernard Tschumi, Architecture and Disjunction

On Space was commissioned by the French percussion ensemble Les
Percussions de Strasbourg and GRAME (Centre National de Création Artistique), it was premiered on March 7, 2000, at the opening concert of the Musiques en Scène festival in Lyon, France. On Space closes Pampin's Percussion Cycle, a cycle of four pieces exploring the materiality of different percussion instrumental families; the other pieces of the cycle are Métal Hurlant (metal), Toco Madera (wood), and Skin Heads (skins). On Space uses sound materials created in those three works to shape space as continuous matter, capable of inflections and dramatic changes; both the sextet of performers and the electronic sources surround the audience supporting this purpose. The 3D sound system is used to locate sounds dynamically in space and to create a sound environment in which the audience is immersed. The electronic part of On Space acts also as a link between the different families of percussion instruments; the electronic sounds present spectral characteristics analogous to the instruments helping them blend or morph into each other over time. Divided in four continuous sections (named North, West, East and South), the form of On Space is freely modeled after Jorge Luis Borges' short story Death and the Compass. Some of the ideas behind the spatial design and layering of the piece could be traced back to concepts presented by Bernard Tschumi in his book Architecture and Disjunction.

A large revision of On Space (in particular of the West and South sections) was completed in 2005, right before the surround recording of the entire Percussion Cycle by Les Percussions de Strasbourg in January 2006.

COMPOSER BIO: Juan Pampin
Juan Pampin is Associate Professor of Composition at the School of Music of the University of Washington and Associate Director of the Center for Digital Arts and Experimental Media (DXARTS). Pampin received an MA in Composition from Conservatoire National Supérieur de Musique de Lyon, France and a DMA in Composition from Stanford University, where he studied with composer Jonathan Harvey. Juan Pampin’s music explores a territory outlined by the concepts of space, memory, and material; algorithmic composition and signal processing tools of his own development assist him in this artistic quest. His compositions, including works for instrumental, digital, and mixed media, have been performed around the world by world-class soloists and ensembles such as Melia Watras, Susana Kasakoff, Les Percussions de Strasbourg, Arditti String Quartet, Sinfonia 21, and many others.

ARTIST BIO: Les Percussions de Strasbourg
Formed in 1962, Les Percussions de Strasbourg has earned a strong reputation over its 50- year history as a pioneering force for the creation and performance of new music. Since its foundation, the group has presented world premieres of more than 250 works, including pieces by emblematic modern composers such as Iannis Xenakis and Gérard Grisey. The group’s commitment to new compositions continues to inspire composers and audiences alike with a sense of urgency in the quest for innovative forms of musical expression. Les Percussions de Strasbourg reinvents the very form of the percussion recital in order to renew the spirit, discourse, and aesthetics of artistic performance.