Winter After Times of Fire

Winter After Times of Fire (2019) is a surround sound collage created as an audio “score”  for an ensemble of performers-improvisers. It was commissioned by the Seattle-based trio Kin of the Moon with the support of King County's 4Culture.

Kin of the Moon is an improvisation-centric, technology-friendly chamber music series incubated in Seattle's rich musical scene. Headed by violist/improviser Heather Bentley, composer/vocalist Kaley Lane Eaton, and flutist/improviser Leanna Keith - Kin of the Moon explores sonic rituals, promotes cross-pollination of genres, emphasizes the communicative power of specific performance locales and celebrates the creativity that multiplies itself through the collaboration of performers and composers.

The sound material for the fixed-media part comes from multiple sources.  Much of the material comes from improvisation-based recording sessions with members of the Kin of the Moon in a number of acoustically interesting spaces.  During such recording sessions I would play pre-recorded short phrases and ask the ensemble to create a response. The response was recorded in Ambisonics and transformed with the use of the Ambisonic Toolkit (ATK). Later I took some of those responses – processed and transformed – to other spaces.

For instance I took excerpts from previous recordings to Satsop Abandoned Nuclear Plant (Washington State), where I asked flutist Leanna Keith to add another response. In that space I also improvised short sections in a violin-piccolo duet with Leanna, which was later transformed into sequences of fast-moving, wind-like sweeping noises.

At another session I asked violist Heather Bentley and flutist Leanna Keith to improvise with an artificially re-created reverb from Dan Harpole Cistern in Fort Worden. Along with the material created through interactions with the ensemble, I also used excerpts from my earlier recordings (for instance, a small excerpt from 2007 recording with Polish soprano and my long-time collaborator Anna Niedźwiedź, at the Missionaries Church in Kraków, Poland). I used these excerpts either as triggers for the ensemble, or by embedding the heavily transformed versions of them into the final soundscape.

All that material was composed into the Ambisonic soundscape, which served as an aural score during the live performance. The piece is meant to live its own life and change with each performance, each set of performers, and each performance space. 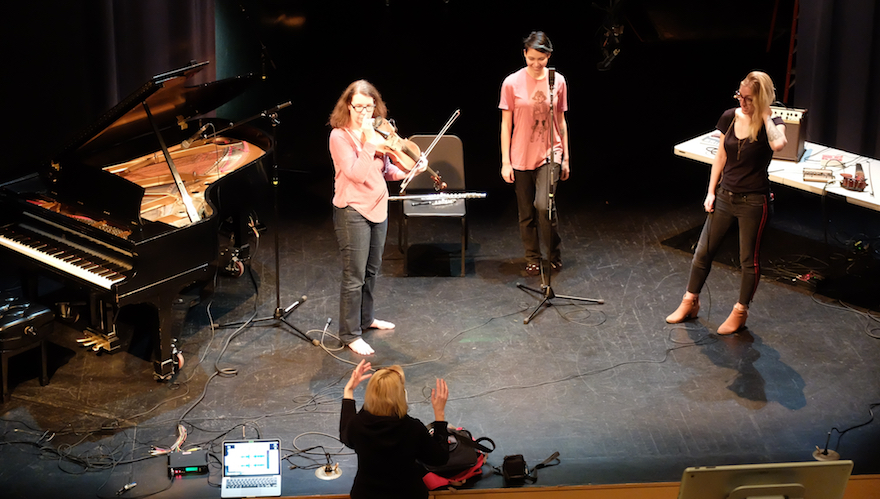 Image: rehearsing with Kin of the Moon at Cornish College of the Arts, PONCHO Hall

Having a strange and slightly post-apocalyptic experience of living in a world engulfed by wildfire smoke – as in Pacific Northwest summer 2018 – made me think of global processes, forces of nature that inevitably lead to one another after reaching a critical point of no return.  An ice age as a result of volcanic eruptions, then broken by volcanic activity, a nuclear winter following the time of fire, when life remains dormant. The title is a metaphor for these contradictions, bound together in an inevitable cycle of destruction and rebirth.